The robots are here and how you should respond

How to leverage automation and artificial intelligence (AI) for business transformation.

The last few months and weeks have clearly shown that a world with artificial intelligence (AI) and automation is well and truly here.

By the end of August, Uber had started picking up passengers using self-driving cars in the US, Nutonomy, a startup out of Massachusetts Institute of Technology (MIT), also began picking up real customers with electric self-driving taxis in Singapore.

While, even in Australia, driverless electric buses are set to be trialled in Perth in a test run for the use of autonomous vehicles on West Australian roads.

The future is here and this will mean big changes for governments, businesses and customers.

The growth in autonomous machines – robots – and their software counterparts – bots – are going to change the way we trade and work.

The biggest changes to our current economic reality will be in the way businesses are run and the job market.

This future is not going to be evenly distributed with only companies and governments quick and enterprising enough to leverage the opportunities that AI and autonomation bring, surviving the next few decades.

US Council of Economic Advisers chairman Jason Furman gave a speech at the AI Now conference on the effects that AI is likely to have on labour markets in the near term.

In his remarks, Mr Furman doesn’t quite buy the argument that automation will take all jobs, but rather envisions a world where the technology would create more jobs over time and based on history, also improve overall wealth.

There is a caveat though, US Bureau of Labour Statistics estimates, in the table below, that jobs that pay less than $20 per hour have an 83 per cent likelihood of being automated.

While those jobs might not disappear entirely, Mr Furman makes the point that this could mean there will be higher downward pressure on the wages of low-medium skilled work, which means less pay over time.

The future belongs to companies that can leverage automation and can compete more effectively with less people on staff.

It’s easy to scoff at this and think that your industry will be shielded from these changes, but recent history is littered with companies that did not innovate enough in the last decade and are no longer running or struggling to survive.

Think about companies like Blockbuster, Kodak and media and communication companies like Fairfax Media and Foxtel, which have had a huge chunk of their revenue eaten up by the likes of Netflix, Hulu and carsales.com.au.

The AI revolution is bound to be quite unforgiving to organisations and professions that fail to leverage the opportunities that these new technologies bring.

This is set to affect countries, giant organisations and medium-sized businesses that include traditional professions like law, accounting, journalism, transportation and logistics.

This is a view shared by Richard Susskind and Daniel Susskind, a father-son duo who wrote The Future of the Professions (watch them talk about their book on YouTube for a quick summary).

Founder of REX, the Relationship Economy eXpedition, Jerry Michalski, sums it up with this statement he gave to the Pew Research Centre internet group on their research into AI and its affects on the human workforce: “Automation is Voldemort: the terrifying force nobody is willing to name".

If you actually believe that this is going to happen, the question enterprising leaders should be looking to answer is how can you leverage automation and AI to help with your organisational transformation?

From our research and conversations we’ve been having with organisations, we’ve identified some key areas that leaders looking to guide their organisations through the new age of AI and automation fuelled transformation, should be looking at.

In order to get a leg up, organisations should look to start partnering with startups and organisations that specialise in some of the areas listed and also look to invest in educating and empowering their workforce for this knowledge driven economy.

The application of these automation concepts to organisational/business challenges will still need to take into account the business process and organisational policies in place.

Policies and processes around information flow, compliance, government regulations around data collection and monitoring policies will need to be considered.

Organisations may need to restructure and create new business units while transforming businesses in order to take advantage of AI and automation.

Organisations are primarily made up of humans and still require humans to function (well for now, at least).

Most organisations are comprised of people providing a service for consumption of other humans or organisations.

AI can help augment human capabilities by leveraging the extraordinary amount of data we create daily, making sense of it and giving recommendations to leaders on what actions to take when dealing with internal and external stakeholders to get the best outcome for an organisation.

The advent of AI has lead to the growth of quite a few communities of developers, researchers and entrepreneurs all looking to collaborate and solve interesting problems with AI.

One of the many communities sprouting up is Open AI, a non-profit research company created by Elon Musk and Sam Altman (president of Y Combinator, the infamous tech incubator that has produced companies like Dropbox, Airbnb and payments company Stripe).

Open AI aims to champion and develop open-source AI to benefit, rather than harm, humanity.

Leaders of organisations will need to involve themselves in communities and ecosystems like Open AI to help support their transformation efforts and get a competitive advantage.

New technologies like AI always bring great opportunities but can also be quite disruptive to incumbent players in different industries.

History has shown that the companies and organisations that survived were the ones that were willing and open enough to adapt and transform their organisations to be able to keep pace with the rapidly changing world.

Want some help automating your business processes and using AI to create products/services that your customers will love? Contact SEED to make an inquiry. 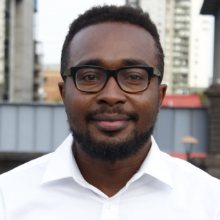 Founder & Director
@ Sheda
As Sheda's Founder, Mike ensures that we are applying the best technology for our customer's needs on both a business and technical level. A guest lecturer and tutor at the University of Melbourne and RMIT University, his interests include applying machine learning, A.I and big data technologies to problems in health, agriculture and finance in the developing world.
FOLLOW